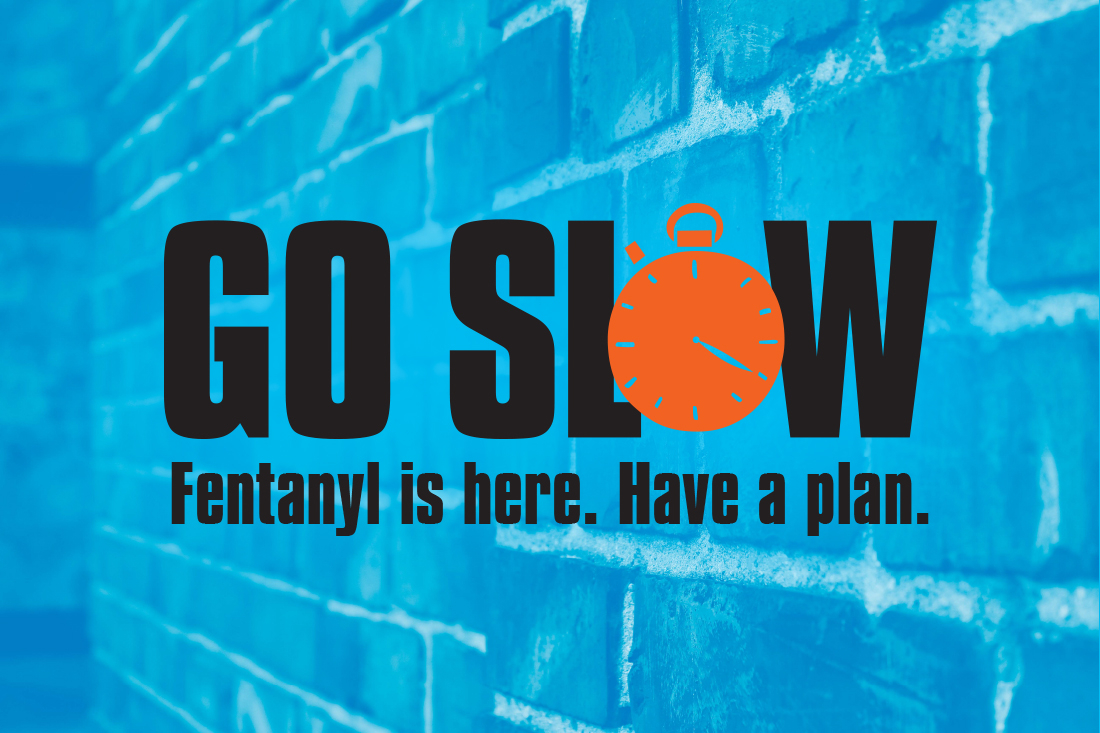 by Cari Berkowitz and Erika Joab

“Go Slow.” This phrase can have many meanings: drive slow, work slow, walk slow, talk slow, etc. But for the Baltimore community, these words hold particular weight. To our community, this phrase references slowly injecting or taking drugs that could be laced with synthetic fentanyl. Across the nation, there has been a spike in the amount of fentanyl-related deaths. In 2017, there were 800 fentanyl-related deaths accounted for in Baltimore alone. Bmore POWER (Peers Offering Wellness Education and Resources), Behavioral Health Systems of Baltimore, and John Hopkins Center for Communication Programs joined resources and asked Mission to develop a general awareness campaign to educate the community on the presence of fentanyl, while also highlighting practical harm reduction strategies.

For Phase 1, Mission created the logo, key messaging, tagline, icons, collateral, and a website as a resource for Bmore POWER and other outreach organizations across the state to bolster their overdose prevention education and support efforts. The target audience for Phase 1 of Go Slow included individuals within the Baltimore community who use heroin through injection. Practical tips for harm reduction were gathered and disseminated through Bmore POWER’s grassroots outreach.

For Phase 2 of the campaign, our goal was to reach a larger audience by incorporating a paid campaign in conjunction with BmorePOWER’s efforts. The messaging needed to speak to individuals familiar and unfamiliar with harm reduction strategies, individuals searching for information, and individuals with no context. The goal of Phase 2 was to emphasize the importance of safety and well-being by motivating people to talk about, create, and implement overdose prevention plans. Most campaigns combating drug use rest on scare tactics as catalysts for behavioral change. For the Go Slow campaign, the messaging needed to communicate acceptance, love, and authentic concern for the safety of people.

Using data collected by Behavioral Health Systems of Baltimore, we concentrated ads to areas of high risk, through traditional and digital media channels targeted toward key audiences. Transit ads were placed on bus shelters, bus interiors, metro kiosks, and the interiors of metro rail cars to capture the attention of commuters. Bus ads were placed on buses leaving from specific garage locations with routes that intersected with areas identified as high risk. Metro kiosk ads were coordinated with Bmore POWER’s outreach efforts in high-risk areas. The challenge with transit ads was the lack of control of the audience; while we did target specific areas that the ads were placed in, we had little control over who saw the ads. To communicate with a more targeted audience, we utilized digital advertising to complement the traditional media.

Most campaigns with a goal of creating general awareness utilize digital channels such as display ads and social media. These channels are visual in nature and can reach a broad audience with an eye-catching design to grab your attention. At Mission, we decided to take it one step further. In addition to including advertisements on Google Display, Facebook, and Instagram, we decided to also include Google Search in the campaign strategy. After researching online behavior, we found that many people throughout Baltimore and the state of Maryland were searching for terms like “opioid crisis,” “opioid overdose symptoms,” and “heroin epidemic Baltimore.” These search queries revealed that our community is actively looking for information on the opioid crisis. Utilizing Google Search allows us to share knowledge, tips, and resources that Bmore POWER and Behavioral Health Systems of Baltimore have to offer to people who are currently seeking more information.

The sensitive topic of drug use and addiction presented some challenges in the execution of the campaign. Throughout the last few years, there have been many developments in the digital advertising space around what can and cannot be promoted, required certifications for specific industries, and long lists of what can and cannot be written on an ad. Thanks to our representatives at GoogleAds and Facebook, we were able to follow the necessary procedures to get these campaigns up and running while following the guidelines and regulations around pharmacy terminology and addiction centers.

In 2018, GoogleAds and Facebook both made the decision to partner with LegitScript, a company that “provides the only certification service for drug and alcohol addiction treatment providers” and is “relied on by Google, Bing, and Facebook to vet advertisers for eligibility” (www.legitscript.com). In other words, having a LegitScript certification allows for advertising platforms to prevent fake or scam accounts from taking advantage of people in need. We were made aware of this certification after speaking with our representatives about our campaign topic. We wanted to be sure we would be able to execute a campaign about the opioid crisis, addiction, and harm reduction. Research of the certification revealed that it applies specifically to addiction treatment, support groups, and crisis hotlines. We felt that this certification was not applicable to our campaign so we contacted LegitScript and explained who Bmore POWER is and the goal of the campaign, and they agreed we did not need their certification. We were able to show this email correspondence to the Google Ads and Facebook representatives to bypass the campaign restrictions.

While we did not need the LegitScript certification, there were still obstacles we had to overcome within Google Search and Google Display. Certain keywords and keyword combinations are not allowed. This was discovered after trial and error as there is not a public list available of what words are not allowed to be targeted. In Google Display, the word “addiction” is allowed but “drug addiction” is not. One reason for these limitations is the Pharmacy Certification, which applies to medical facilities and pharmacies. The word “drug” triggers Google to analyze the keyword as being related to the pharmaceutical industry and prevents the keyword from being allowed to be targeted. There is more flexibility in Google Search with what keywords can be targeted, but in some cases just because a keyword can be added to the targeted list does not mean Google will allow the ad to be delivered when someone searches for that word or phrase. This lead to a lot of observation and tweaking of the campaign after it launched as many words were included in the targeted list but soon discovered that they did not lead to any ad impressions. Through this whole process, we have been able to identify the words that are and are not allowed uniquely in Google Display and Google Search to create a successful, well-organized campaign that is delivering the Go Slow message.

This campaign launched in mid-July of 2019 and will continue running through the end of September. To learn more about harm reduction, visit www.goslow.org 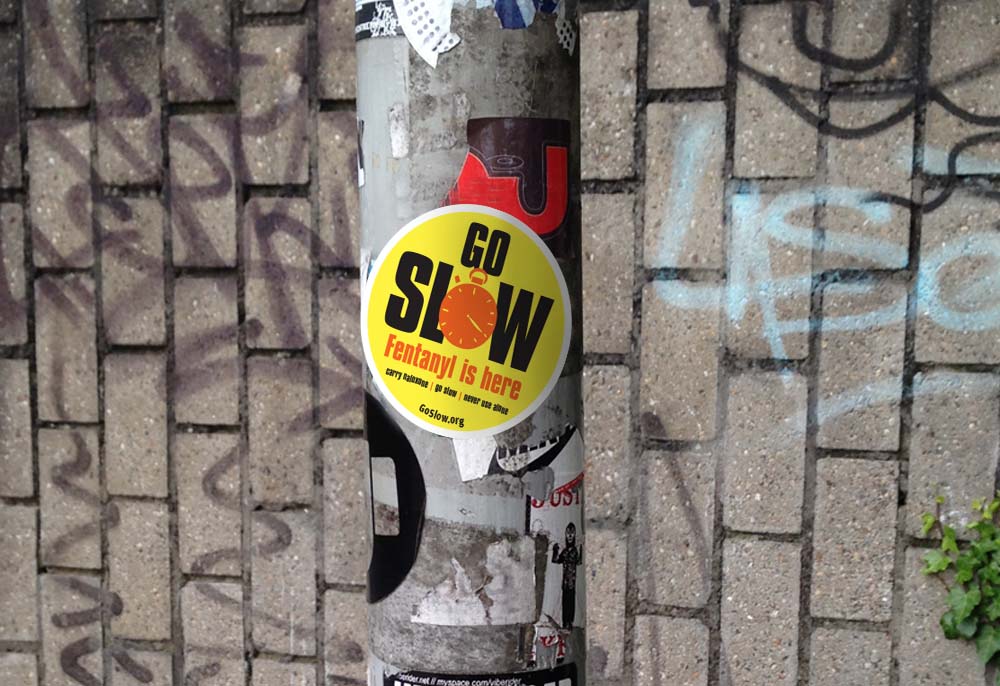 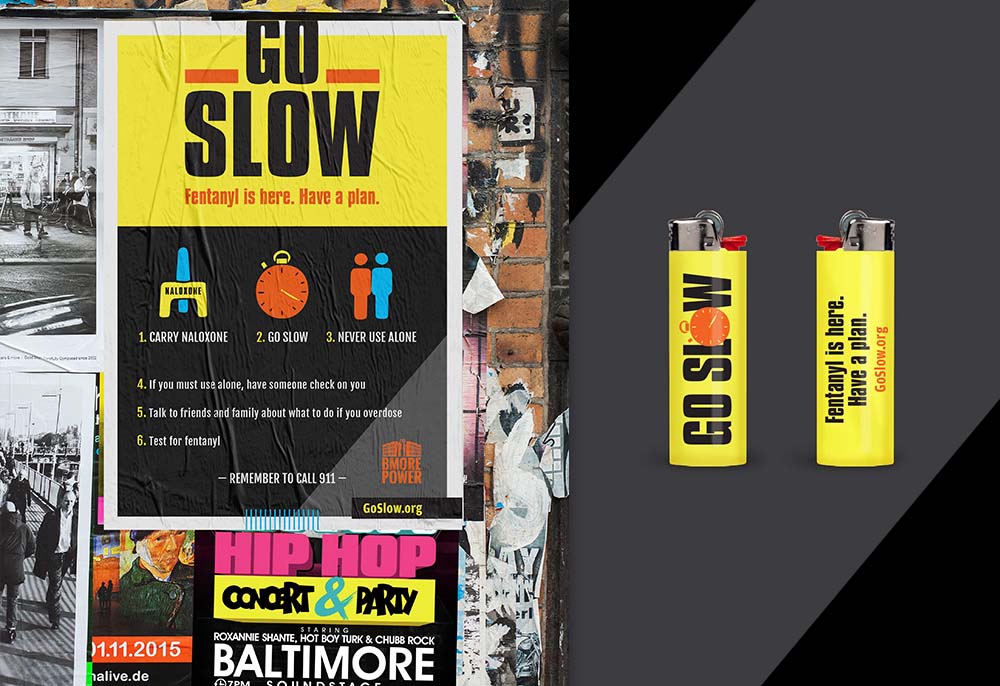 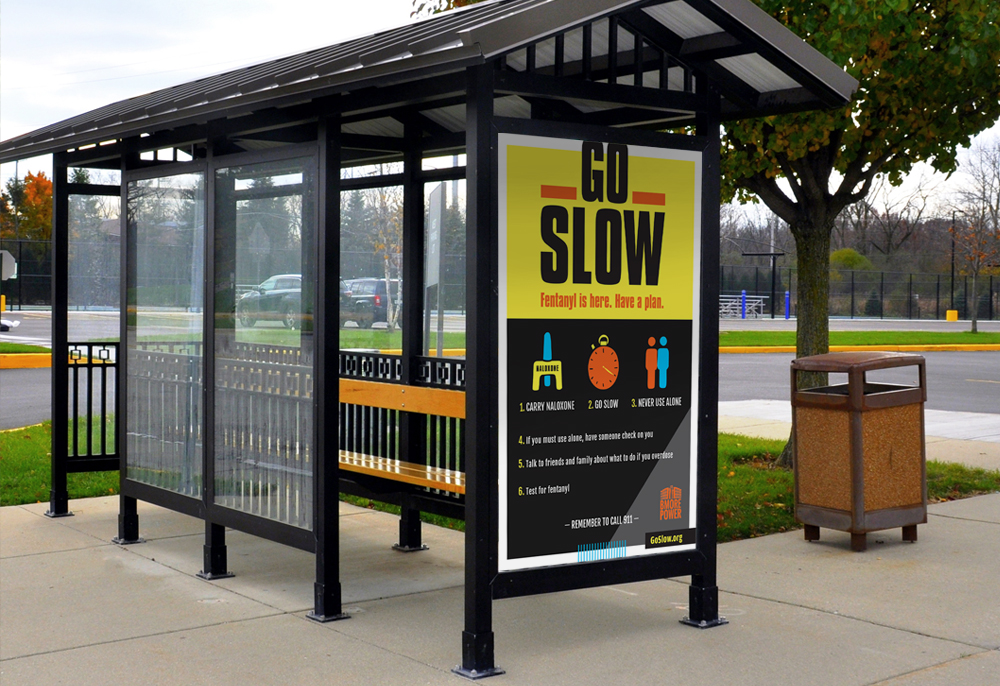 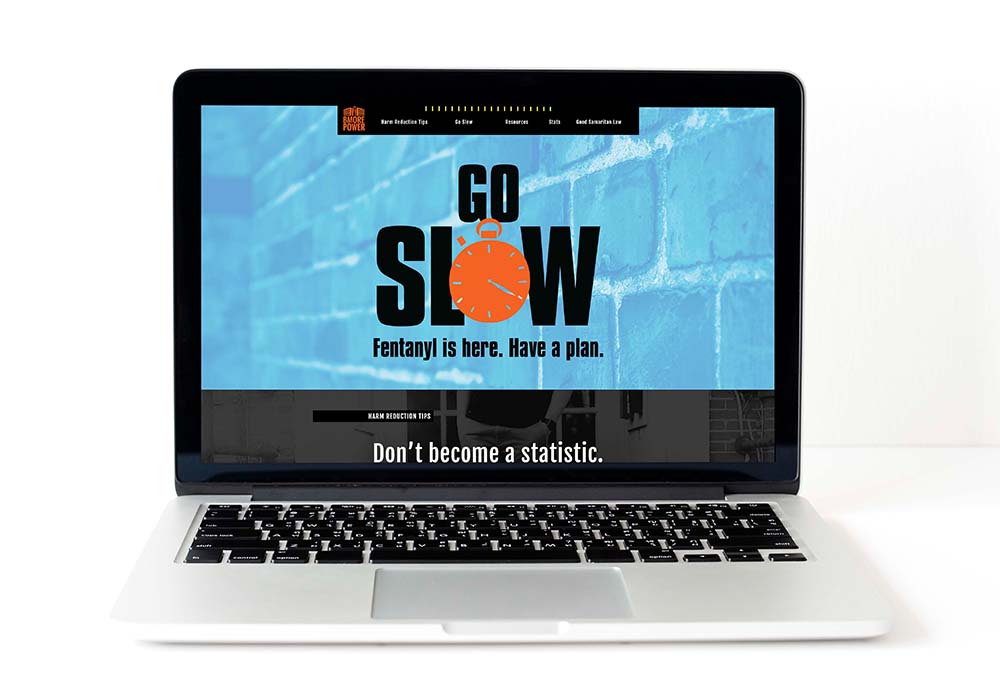 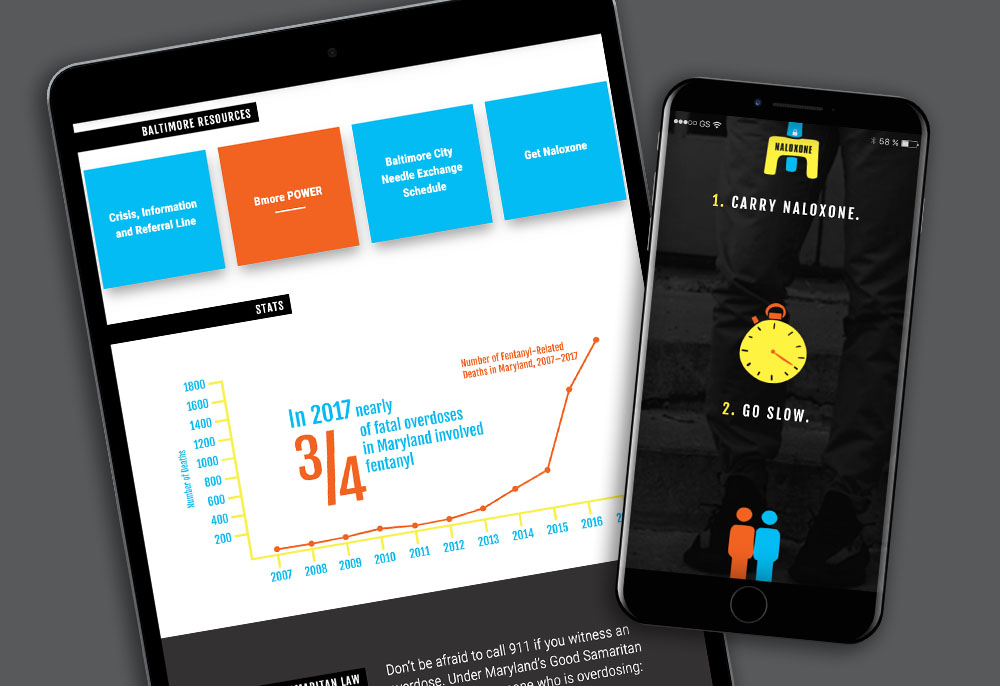 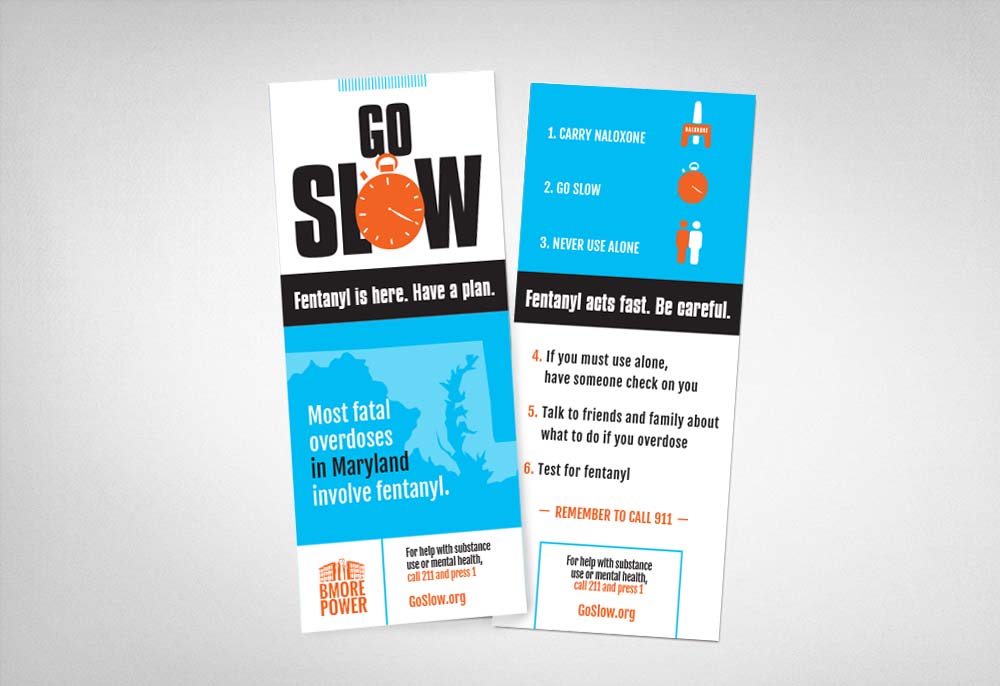 Open and Helping Those Who Are #ClosedButStillCaring